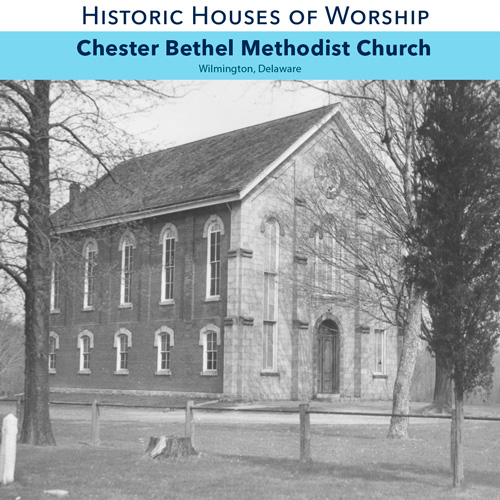 “Chester-Bethel Methodist Church (M.E.) is located, on the Faulk Road, near Zebley’s Corner. As early as 1765 Captain Thomas Webb, a pensioned British officer, was preaching Methodism at Marcus Hook and in the Isaac Tussey home at the top of Penny Hill. Several residents of Brandywine Hundred, near Zebley’s Corner, became converted and they formed a Methodist Society in 1775. Meetings were held in the home of David Ford. In 1780, a log chapel was built on the Cloud farm, near the State line, and it was called “Cloud’s Chapel.” In fact, the Cloud farm was so close to the line that for several years after purchasing the property Mr. Cloud was compelled to pay taxes in both Counties; Delaware, at that time, being a part of Pennsylvania.

On Aug. 14, 1797, Robert Cloud and his wife Magdalene, for a consideration of five shillings, deeded one acre of land, as a church site, to Powell Clayton, Aaron Mattson, Thomas Webster, Robert Pyle, Jr., Daniel Pyle, David Ford, Wm. Ford, Wm. Hanby and Benj. Hanby, trustees. The deed recites that they are to build a house of worship for the M. E. Church, it also pro-vides that any vacancies on the board shall be filled by the trustees with the pastor of the church having a casting vote. The church was built of stone and there was a gable-stone dated 1799. It had a gallery around three sides. The name, “Bethel M. E. Church” was then adopted. Situated in a strictly rural section, the church prospered and grew, with no major difficulties until the year 1847. Then dissention did rear its ugly head and resulted in the building of Siloam Church, just across the Pennsylvania line. The bitterness between these two congregations continued for more than sixty years. The cause of this split, while seemingly very childish to us, was very serious and very real to them. It appears that the boys and girls of Bethel formed a singing society which would meet at the different member’s homes and practice singing, including the hymns then being sung in the Methodist churches. As their singing ability developed they decided to ask the trustees to allow them to sit in a group at the church services and to be allowed to nail a four-inch strip of wood upon the pews in front of them upon which to rest their hymnals. In other words, they wished to form a church choir. Then the trouble started, part of the congregation being in favor and others decidedly opposed to the innovation. The arguments waxed back and forth and resulted in the anti-choir faction withdrawing from Bethel and building Siloam in 1852. In 1873, the members decided to build a new church at the Opposite end of the graveyard. In preparation for this, on July 30, 1873, they entered into an agreement with John B. McCay, who owned the adjoining farm. The trustees agreed to transfer to Mr. McCay the lower end of the property, consisting of 69 perches upon which the stone church stood and Mr. McCay agreed to transfer to the trustees two acres on the upper end of the lot and to pay one-tenth of the cost of the new church, the payment not to exceed $1200.00. The church was built of serpentine stone and brick. It was dedicated on Dec. 13, 1874. The old church did yeoman service as a farm building until 1940, when it was torn down. On Mar. 1, 1914, a storm unroofed the church, caved in the rear wall and damaged the interior. Repairs were made immediately. The old horse-sheds were removed in 1938. There is a large and well-kept cemetery beside the church. There are a number of graves with field stones for markers. The oldest tombstone that the writer could find is that of Thomas Webster who died on Oct. 25, 1800. On the tombstone of Mary Galbreath who died on Apr. 17, 1861 is the following inscription: “Remember me as you pass by As you are now so once was I As I am now so you must be Prepare yourself to follow me.” This inscription, slightly varied, appears on several tombstones in Dela-ware. During the last century it was popular to have a four-line verse in-scribed on tombstones. According to Mr. Wm. V. Sipple of Milford, the monument dealers had booklets containing a large number of verses appropriate for tombstones from which many customers would make selections. The above-mentioned verse appeared in these booklets, which resulted in its selection, very often. Additional land was purchased from W. P. Missimer on Sept. 25, 1907 and Apr. 8, 1913.” (1)