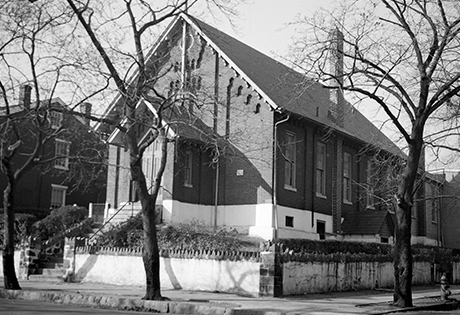 “Olivet Presbyterian Church was the outgrowth of a Sunday School started on Aug. 5, 1849 in a frame building known as Hedgeville School with E. T. Taylor as Superintendent. It was located at the corner of Newport Road and Dock Street, now the southerly side of Maryland Ave., about 320 feet west of Front St., Dock St., in the meantime, having been vacated. The Sunday School was sponsored by Hanover Church who purchased the building. Prayer meetings and preaching were maintained for a number of years.

The congregation was organized as a church on Jan. 31, 1863. The cornerstone of a new building, known as Olivet Chapel, at Adams and Chestnut Sts., was laid on Oct. 8, 1863. Judge Willard Hall, known as the father of the Wilmington Public School system, took a leading part in the ceremonies. This property was owned by Hanover Church, who took title to it on Feb. 8, 1864. The church was dedicated on Feb. 7, 1864. The congregation was formally constituted as Olivet Presbyterian Church on Jan. 31, 1868.

After being enlarged the church was rededicated on Mar. 13, 1870. The congregation took title to the property on May 5, 1870, from Robert R. Porter. The property was sold in January, 1887. The present site at the s. w. cor. of 4th and Broom Sts., was purchased on Dec. 31, 1887 from the Trustees of the Poor. It was a portion of the old New Castle County Almshouse property. The erection of a Sunday School building was started in October, 1887. The present church was built in 1891. 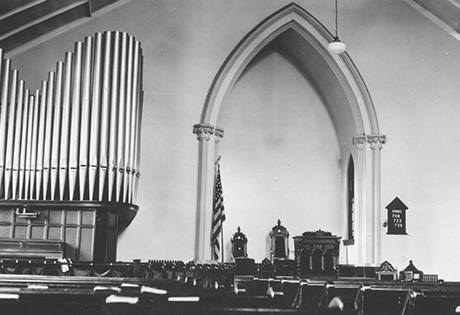 The 50th Anniversary of the occupancy of the present church was celebrated on Sun., Dec. 6, 1942. The 75th Anniversary of the founding of the church was celebrated on Sun., Jan. 31, 1943. The service was conducted by the Rev. Dr. William B. Pugh, Stated Clerk of the Presbyterian General Assembly. It had been the intention to hold a full week of ceremonies but be-cause of war-time fuel oil restrictions, a one-day celebration was held.” (1)