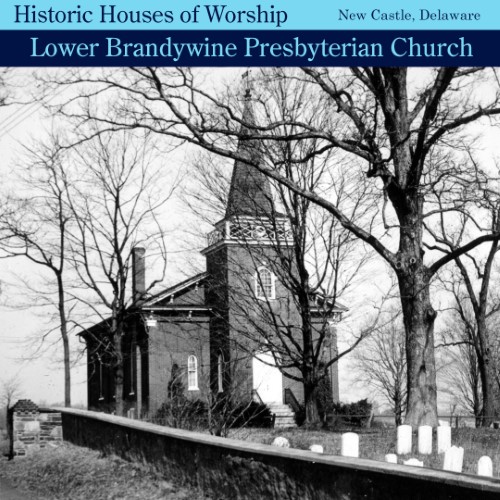 “Lower Brandywine Presbyterian Church is located on the Kennett Pike, one mile east of Centerville. Lower Brandywine was originally located on the easterly side of the Brandywine Creek below Pyle’s Twin Bridges and on the present estate of Harry Haskell. This site, of 81 sq. perches, was donated by Ralph Pyle to the trustees of the Presbyterian Meeting-House of Birmingham, in the Province of Pennsylvania, on Oct. 15, 1720. Mr. Pyle reserved for himself and his heirs the liberty to build a pew six feet square and to make use of the same and also burial rights for their dead, forever. It was customary in those days to buy or rent space in a meeting-house and to build and own one’s individual family box pew. The deed stipulated that a meeting-house was to be erected.

This log church was used until 1773, when, after quite a controversy, it was decided to build a new church on the present site of Lower Brandywine Church. Only a few field stones, placed upright to mark graves, remain today to show the location of the old log church.

One acre of land at the Kennett Pike and Lewis’ Road was donated as a church site on Aug, 22, 1774, by Jeremiah Smith. A log church was then built.

It stood in front of the present church where the old graveyard is located. In 1835, the building was weather-boarded and plastered. In 1860, a new brick building was erected and the timbers of the old church were used to build horse-sheds. The corner-stone was laid on Sept. 1, 1859 and dedication serv-ices were held on Nov. 8, 1860.

A group of members developed a cemetery adjoining the church prop-erty and on Jan. 15, 1863, they transferred the property, consisting of 85 perches, to the church trustees for $106.25.

In 1890, an outside vestibule was added which allowed several extra rows of pews to be installed. Stained-glass windows were installed at this time. On Apr. 2, 1892, an additional one-eighth of an acre was purchased from Samuel Frizzell. In 1928, an organ-room was added, a steeple was built over the vestibule and the building was generally reconditioned. In addition to the old graveyard there is a large modern cemetery. In 1828, the Presbytery of New Castle met here and it is claimed that it was the first time in their history that they were entertained without the serving of any hard liquor.

Framed and hanging on the walls of the church are photostatic copies of the Ralph Pyle and Jeremiah Smith deeds.