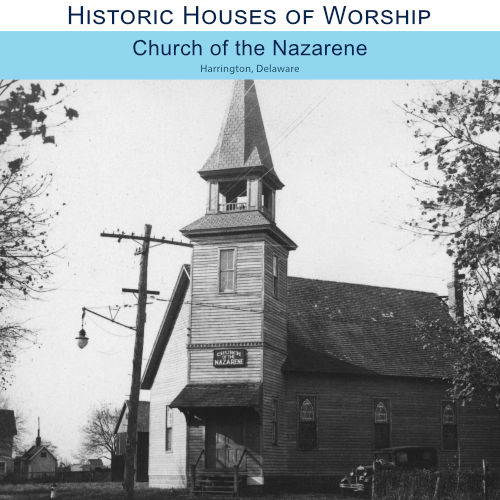 “Harrington Pilgrim Holiness and the Church of the Nazarene. In 1902, the Apostolic Holiness Union Church held a revival in a hall at Harrington. The crowds became so large and so enthusiastic that, fearing for the safety of the building, the meetings were transferred to the shirt factory. The church was incorporated on June 4, 1902. On Mar. 25, 1903, they purchased from the Del. Bap. Union, the Baptist Church on Mechanic St. On Mar. 23, 1906, they purchased the parsonage lot from Samuel L. Shaw. The church was dedicated on May 14, 1907, by the Rev. D. M. Carpenter. Dissention arose in the congregation and a bare majority voted to turn the property over to the Pentecostal Church of the Nazarene. On June 15, 1910, they purchased a property on Mechanic St. from Wm. H. Knox for a parsonage, this was sold later.

The minority withdrew from the church in March, 1909, held meetings in Masten’s Hall and organized a Pilgrim Holiness Church. Trustees were elected on May 10, 1909. On May 26, 1909, Cyrus N. Grant donated a church site on Liberty St. A church was built and it was dedicated on Nov. 28, 1909. Additional land was purchased, on Sept. 3, 1937, from Cyrus N. Grant. Mr. Grant owned the land on both sides of the church lot. He sold one of these adjoining lots to an individual and when it was surveyed it developed that the church building encroached on this lot. To correct this, the church bought the adjoining lot on the other side of the church and had the building moved over the required distance. The parsonage lot was purchased from Irma J. Harrington on June 1, 1939. The church was incorporated on Sept. 16, 1939.” (1)