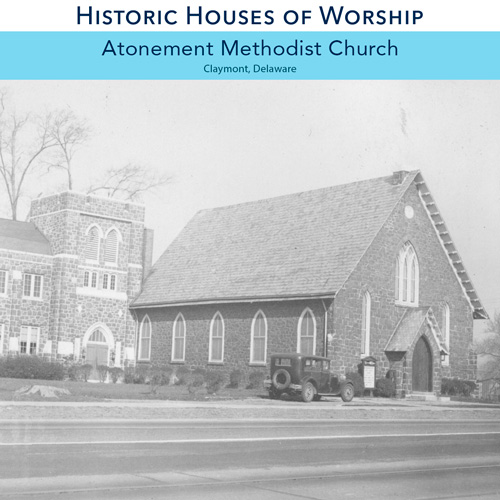 “Atonement Methodist Church (M.E.) at Claymont, was the outgrowth of a Sunday School organized, in 1864, in a room over Frank Ford’s grocery store which stood opposite the present Naaman’s Tea House. At a meeting held on June 2, 1866, it was decided to build a church. Thomas Kimber, a Quaker, donated the site on June 7, 1866 and subscribed $2500.00 toward the building. The church was dedicated during the following November. In 1885, the Sunday School was built.

After major improvements, reopening services were held on July 24, 1898, with Pres. Elder Robert Watt in charge. The church was damaged in the storm of Mar. 1, 1914. A large addition to house the Sunday School was built in 1927. The corner-stone was laid on the afternoon of June 26, 1927, by the Rev. J. W. Colona. The silver trowel was to be encased in glass and placed in the vestibule of the church. The dedication services were held on Nov. 13, 1927. Memorial windows were installed in 1940. A new Moller Pipe-organ was dedicated on June 22, 1941. During the 75th Anniversary celebration on Nov. 16, 1941, a grove of trees, to be planted in honor of Thomas Kimber, the Quaker, was presented to the trustees.