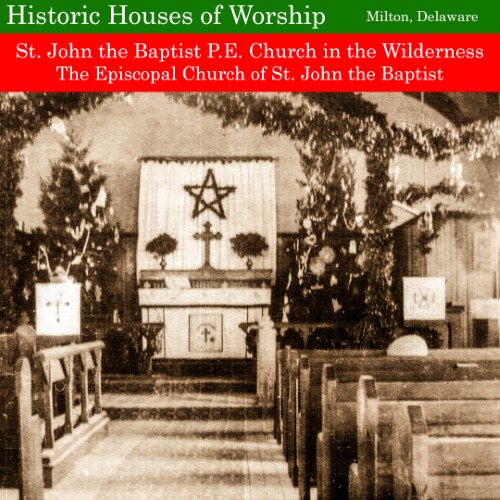 “St. John the Baptist P. E. Church in the Wilderness was located about two and one- half miles s. w. of Milton beside Long Bridge Branch. The first church was built in 1728 under the leadership of the Rev. Wm. Becket, the Church of England missionary in charge of Sussex County. The church was raised on Mar. 27, 1728. The framework was of white oak, the dimensions being 20 ft. by 30 ft. by 12 ft. high. The roof was of cypress shingles and the sides were sheathed with cypress boards. Missionary Wm, Becket speaks of the church as being in the middle of the forest. The writer believes that this accounts for the belief that there was a Sussex County church named “Forest Church.” The church was closed about 1800. It was last mentioned in the records in 1799. The building was used as a school for a number of years. There is no evidence of the church today.

The present church building was started with the expectation of having it completed on Oct. 1, 1875. The consecration service was held on June 5, 1877, by Bishop Alfred Lee and the Rev. J. Leighton McKim. During his pastorate, Dr. McKim would very often walk to and fro between Milford and Milton in the performance of his duties. In 1894-95, a window in memory of Harold Hunter was unveiled.

On May 7, 1899, Bishop Leighton Coleman presented a fine brass altar cross to the church. During 1907-08, a mission was conducted in Ellendale. On Mar. 12, 1915, Bishop Frederick J. Kinsman consecrated a Bishop’s chair presented by the children of Nehemiah D. and Mary P. Welch. The beautiful window behind the altar, erected in 1929, was a bequest of former U. S. Senator Willard Saulsbury in memory of his mother, Annie Ponder Saulsbury, who was a native of this section. In 1936, extensive remodeling was done including a veneer of brick, making the building much more attractive. The church was consecrated on Jan. 17, 1937, by Bishop Philip Cook.

The parish-house was completed and was dedicated by Bishop Arthur R. McKinstry, assisted by the Rev. Benjamin F. Thompson, B. D., on Monday evening, Oct. 6, 1941. On Sun., Dec. 1, 1946, Bishop McKinstry dedicated an American flag and a Church flag. They were presented by Mrs. Marcia Winn, in memory of her son, Joseph T. Winn, Jr., of the Merchant Marine, who lost his life in the North Atlantic and the others who served in the armed forces during World War II. (1)