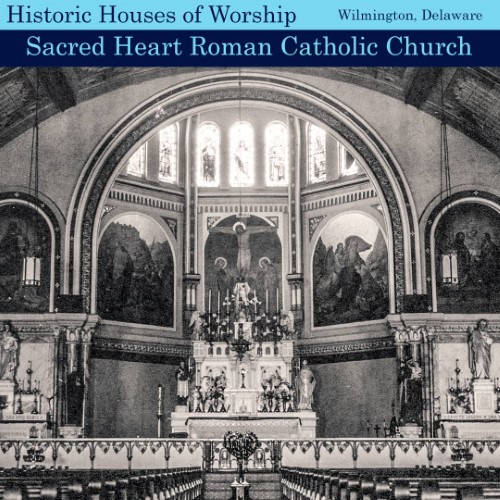 “For one year beginning in 1857 services for German Catholics were held in the chapel of St. Mary’s College. In 1874, a mission for German Catholics was established at St. Mary’s Church. In August, 1874, a lot was purchased on w. 10th St., between Madison and Monroe Sts. The corner-stone of a new church was laid on Sun., Aug. 16, 1874. The basement was used for services from Aug. 16, 1875 until Sept. 2, 1883, on which date the church was dedicated by Bishop Thomas A. Becker at 11 A. M. The services were preceded by a parade of Catholic societies. The Bishop celebrated Pontifical High Mass. The Very Rev. Father Gerard preached in German after which the Bishop gave talks first in German and then in English. Vesper services were held in the evening. A parochial school was opened in the parish-house and later moved to the basement of the church.

The corner-stone of the parochial school. was laid on Apr. 3, 1898, by Bishop John J. Monaghan. He was assisted by the Very Rev. Leonard Walter and the Revs. Isenring, Fallon, Flynn, Hugo, McGill and Kellog. A procession, headed by a band, marched from the church to the school site. The school was blessed by Father Hugo, O.S.B., on Sept. 11, 1898.

The convent of the Sisters of St. Benedict was dedicated on Dec. 7, 1906, by Father Corbinian, O.S.B., assisted by Father Hugo and Father Albert.

The Rev. Wendelin Mayer, O.S.B., known as the founder of Sacred Heart Church, is buried in a shrine in the basement of the church. Buried with him are scores of crutches and braces donated by crippled persons who were cured by his intercessory prayers. In 1940, the shrine was enclosed in a small chapel where it is proposed to celebrate Mass on National holidays. The first Mass was celebrated on July 4, 1940. The chapel is open for visitors on Sundays.” (1)