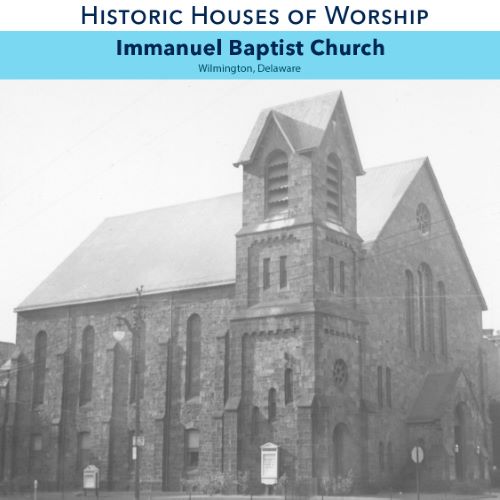 “In 1865, a group of members withdrew from the Second Baptist Church for the purpose of organizing a new church. Their first get-together meeting was held on May 25, 1865. On May 29, letters were granted to them. The church was formally organized on Thurs., June 22, at the home of Anne Semple, 902 Market St., and the name, “Delaware Avenue Baptist Church,” was adopted. It was recognized as a regular Baptist church at a meeting held on July 6, 1865. The church was incorporated on July 28, 1865.

Meetings were held in the Wil. Institute lecture-room and prayer-meetings were held in the Phoenix Volunteer Fire House, No. 209 e. 14th St. They rented the meeting-house of the Primitive Baptist Church at 1008 King St., where the first regular services were held in October, 1865. During that month they joined the Phila. Association. A site for a new church was secured at Delaware Ave. and Washington St., but this proved to be too small. On Mar. 1, 1866 and Feb. 28, 1867 the present site on the s. e. cor. of Delaware Ave. and West St. was purchased. Ground was broken on June 27, 1866 and the lecture-room was dedicated on Jan. 2, 1868, by the Rev. J. Wheaton Smith, D.D. The baptistry was ready for use in July, 1868. Previous to this time, baptisms were held in the Brandywine Creek, the German Baptist Church and the Second Baptist Church. The church auditorium was dedicated on Oct. 13, 1870, by the Rev. P. S. Hen-son, D.D., assisted by the Rev. G. W. Folwell, the pastor and several other clergymen. The pulpit furniture was donated by the members of the Second Baptist Church. In 1871, Philip McDowell, of McDowellville, presented a lot, 80 ft. by 100 ft., on the n. w. cor. of 11th and Dupont Sts., where he had built a chapel. The consideration was $1.00. The deed stipulated that a fence must be maintained and it included a reversion clause in the event any of the land was used for other than church purposes. A mission school was conducted here. In 1885, a group of 60 members withdrew from the church to organize Grace Baptist Church. On Tues., Dec. 27, 1898, the church had been decorated with bunting in preparation for a Christmas celebration to be held that evening. When the sexton was lighting the gas fixtures, the bunting caught fire. Capt. Peter B. Ayars tore the bunting down, put out the fire with no damage and a few moments later the congregation began to assemble for the exercises. The church was improved in 1910. In 1925, the building was repointed, painted and new windows and new lights were installed. The parsonage at 1018 w. 10th St. was purchased on May 19, 1925. The decision to merge with Bethany Baptist Church was made in 1931. Delaware Avenue-Bethany Baptist Church was incorporated on Sept. 30, 1931 and on Oct. 16, 1931, the title to the property was assumed by the new trustees. The first service of the combined congregations was held on Sun., Oct. 4, 1931. The Rev. Rittenhouse Neisser, D.D., the temporary pastor, delivered his farewell address and the Rev. John R. Humphreys, B.D., the new pastor, was welcomed by the congregation. On Sun., Mar. 29, 1942, an American flag and a Church flag were dedicated and unfurled in the church. At a congregational meeting held on Dec. 4, 1946 it was decided to change the name to “Immanuel Baptist Church.” The new name was dedicated by the Rev. John M. Ballbach on Sun., Dec. 8, 1946.” (1)