The church was dedicated on Mar. 19, 1882, at 11 A. M., by Bishop Becker. The first pastor was the Rev. M. X. Fallon. The stations of the Cross were blessed and erected by Bishop Becker on Friday of Passion Week, Mar. 31, 1882. Father George S. Bradford became pastor on Sept. 9, 1885. The parochial school was opened on Sept. 3, 1888. The Sisters of St. Francis occupied the basement of the church for both school and convent. Four schoolrooms were formed by movable wood and glass partitions. The convent was built on French St., in 1889. The church was almost overwhelmed with debt. At this time, the land on King St., extending from the rectory to 14th St., was sold. This afforded temporary relief. Bishop Alfred A. Curtis undertook to reduce the debt and for this purpose he authorized a contest between Fathers Berming-ham and Flynn, to raise funds, during one of St. Mary’s fairs. The prize offered was a trip to Europe. On Jan. 29, 1891, a concert was held at St. Mary’s to raise funds for Father Flynn. When the contest ended Father Flynn had collected $13,000.00 and Father Bermingham had collected $10,000.00, which was enough to pay off the debt on St. Patrick’s Church.


The contest was so close and the feeling aroused on both sides was so bitter that the Bishop gave both priests the trip, Father Flynn, the winner, going one year and Father Bermingham, the next year. When Father Flynn returned to Wilmington, from his trip, on Sept. 14, 1891, a large parade met him at the station and escorted him to St. Mary’s Church where a reception was held. Father Bermingham sailed from New York on Wed., Apr. 27, 1892. On the Sunday previous to his departure, his parishioners, including the members of the Brownson Library Ass’n presented him with a purse of $2000.00.


Bishop Curtis always lamented that he had authorized the contest because of the bad blood that it had caused. Incidentally, both Father Flynn and Father Bermingham later became pastors of St. Patrick’s Church. The church was incorporated on Jan. 7, 1894.
Father Bradford resigned as pastor of St. Patrick’s Church because of ill health. He took a trip for several months, then served at Elkton and at St. Joseph’s-on-the-Brandywine where he died on June‘20, 1895.
The third pastor was the Rev. Dennis J. Flynn, the winner of the above-mentioned contest. He was installed in October, 1894. The parochial school was built in 1895. The corner-stone was laid on May 26, 1895, by Monsignor Satolfi, Papal Delegate to the United States, in a heavy rain. He was assisted by Vicar-General Lyons, the Rev. J. McCarthy, the Rev. D. J. Flynn, U. S. Senator George Gray and Judge David T. Marvel.
In 1897, the size of the rectory was doubled. In 1899, Father Flynn ac-cepted an invitation to join the faculty of Mt. St. Mary’s College at Emmitsburg, Md., of which he later became President. He was succeeded by Father Fallon, the first pastor, who died in 1900.

Father Wm. J. Bermingham was the next pastor. He made a number of improvements to the church including the entrance, the sacristy, a covered passage between the church and the rectory, windows, stations and side altars. The church was dedicated on Oct. 8, 1905, by Bishop John J. Monaghan at the 10:30 o’clock service. The Bishop was assisted by the Revs. Fromentin, Wm. J. Scott, Edward C. Higgins and Vicar-General John A. Lyons. The pastor, Father Bermingham celebrated High Mass and Father Fedigan delivered the sermon. Vesper services were conducted by the Very Rev. John A. Lyons. 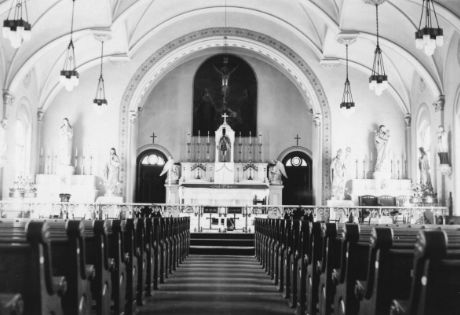 Father Bermingham purchased the building on the s. w. cor. of 15th and King Sts., with the intention of converting it into a convent but this plan was not carried out. Father Bermingham died on Dec. 12, 1907. In January, 1908, the Rev. James F. Quigley became the pastor. During his pastorship the dwelling on the corner was converted into apartments, an addition was built to the school and the convent was enlarged. Father Quigley died on May 3, 1925.

The Rev. James L. McSweeney was ‘installed on June 1, 1925. Father McSweeney has made a great many improvements including a new organ which was dedicated on Feb. 23, 1930.