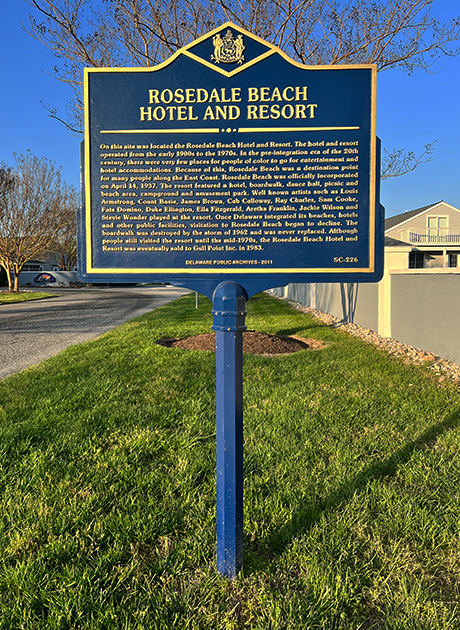 On this site was located the Rosedale Beach Hotel and Resort. The hotel and resort operated from the early 1900s to the 1970s. In the pre-integration era of the 20th century, there were very few places for people of color to go for entertainment and hotel accommodations. Because of this, Rosedale Beach was a destination point for many people along the East Coast. Rosedale Beach was officially incorporated on April 14, 1937. The resort featured a hotel, boardwalk, dance hall, picnic and beach area, campground and amusement park. Well known artists such as Louis Armstrong, Count Basie, James Brown, Cab Calloway, Ray Charles, Sam Cooke, Fats Domino, Duke Ellington, Ella Fitzgerald, Aretha Franklin, Jackie Wilson and Stevie Wonder played at the resort. Once Delaware integrated its beaches, hotels and other public facilities, visitation to Rosedale Beach began to decline. The boardwalk was destroyed by the storm of 1962 and was never replaced. Although people still visited the resort until the mid-1970s, the Rosedale Beach Hotel and Resort was eventually sold to Gull Point Inc. in 1983.