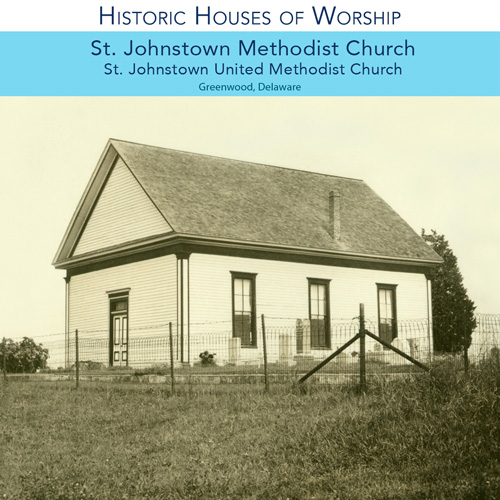 “St. Johnstown Methodist Church (M.E.) is located one mile east of Greenwood on the old King’s Highway. A village named St. Johnstown was located at this point and is mentioned in the records as early as 1776. Situated on the route of the stage-coach lines, there were two inns, several stores and numerous homes. When the Delaware Railroad was built, in 1856, the town of Greenwood was laid out and St. Johnstown declined into a ghost town. Only two houses are there today and one of these is reputed to have been used by Patty Cannon in her slave-stealing and slave-selling trade.

St. Johnstown Church was the outgrowth of meetings held in the woods near this spot, by an old local-preacher named John Marim. Meetings were held in the home of Wm. Laws under the inspiring preaching of Francis Asbury in 1779. A one-acre church site was secured from Wm. Laws, on Feb. 24, 1786, “where a preaching-house now stands.” Francis Asbury mentions St. Johnstown and Mr. Laws in his journal of Mar. 17, 1780 and again on April 13, 1815. The church was incorporated on Mar. 5, 1822. The property was deeded to the new trustees on Mar. 15, 1822.