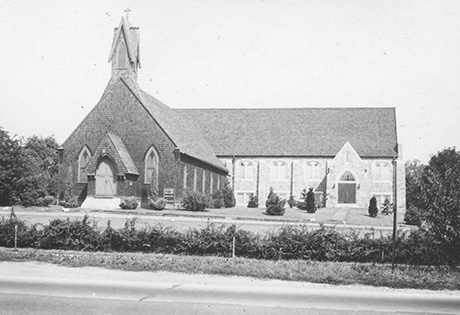 “The Protestant Episcopal Church of the Ascension, at Claymont. As early as 1843, Bishop Alfred Lee held Episcopal services in a schoolhouse at Naa man’s Creek, Claymont. A church was organized on Nov. 7, 1850. Stated meetings were held and in January, 1851, a committee was appointed to arrange the erection of a church building. A rector was appointed on Dec. 1, 1851. On Feb. 18, 1854, a lot of land at the cor. of Philadelphia Pike and Church Lane, was donated by the Rev. J. B. Clemson, who lived in the neighborhood. He conducted a private school patronized by many Wilmingtonians.

The church, of frame construction, was completed and was consecrated on Sept. 14, 1854, by Bishop Alfred Lee. It was named “The Protestant Episcopal Church of the Ascension.” Horse-sheds were built in 1861.

A bell was purchased in 1863. A rectory was built in 1868. The Sunday School room was enlarged and improved in 1870. In 1874, a recess chancel and a bell-tower were built. Reopening services were held on July 4, 1875. On Easter Sunday, 1878, a silver communion set, in memory of a former warden, was blessed. The old set was to be given to some Indian congregation in the West.

On Sun., April 7, 1918, a new organ was dedicated by Bishop Kinsman. It was a memorial to Mrs. Emma A. Lodge presented by her daughters, Mrs. George Lodge and Mrs. Annie Parrish. New pews and furnishings were in-stalled in 1924-25.

In 1926, under the leadership of the rector, the Rev. Chas. A. Rantz, a lot adjoining the rectory property on the westerly side of the Phila. Pike was purchased. The original church was moved to the new site in 1927. At the same time a new parish-house, of stone, was erected, at right angles to the church and connected to it. The corner-stone of the parish-house was laid on June 26, 1927, by Bishop Philip Cook assisted: by the rector. The dedication services were held on Nov. 13, 1927, with Bishop Philip Cook’and the Rev. Chas. A. Rantz officiating.