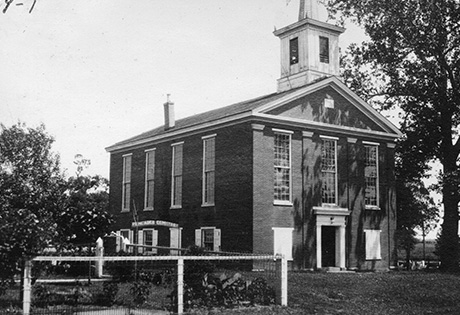 On October 15,1701, William Penn granted 30,000 acres of land to William Davies, David Evans, and William Willis “in behalf of themselves and Company of new Welsh Purchasers.” Known as the Welsh Tract, this expansive holding attracted large numbers of settlers who had immigrated from Wales to Colonial America. The settlers soon established two churches, known respectively as Welsh Tract Baptist and Welsh Tract Presbyterian. The Presbyterian Church was subsequently renamed “Pencader,” a Welsh term meaning “chief chair or seat.” The congregation’s first recorded pastor was Rev. David Evans, who was serving as lay minister in 1710. Though the exact date of the construction of the first church is unknown, the “Meeting-House” had been standing for a number of years when the property was formally conveyed to trustees in 1742. The structure is believed to have been located in the eastern rear of the present cemetery. It was replaced in 1782-83 by a brick building that was used until 1852, when it was dismantled and the present church was built in its place. The “Trustees of Pencader Presbyterian Church” were formally incorporated in 1789. In 1917 the Pencader Cemetery Association was organized to care for the adjoining graveyard. Pencader Presbyterian Church was listed in the National Register of Historic Places in 1977.