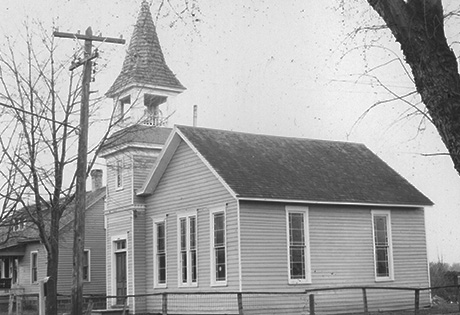 “Jerman’s M. E. Chapel at Smyrna. In the 1880’s, one of the problems of sincere religious workers was to induce the less prosperous members of a community o attend church. Perhaps it was pride but these persons seemed reluctant to attend church services because they could not afford to dress as well as their more prosperous neighbors. In an effort to reach these persons in Smyrna, in 1880, Joshua T. Jerman purchased an old store building on Commerce St., the site of which is now included in the right-of-way of the Du Pont Highway. Mr. Jerman had the building converted into a chapel, named it “Mission Chapel” and a Sunday School was conducted by Mrs. Jerman, a member of Asbury M. E. Church.

On May 1, 1891, the trustees of Asbury Church purchased a lot in Spruance City and the chapel was moved to the new site, rebuilt, and named “Jerman’s Chapel.” In 1902, under the will of Mr. Jerman, the building was placed in the hands of three trustees together with a trust fund of $890.00 for the maintenance of the building with the provision that the chapel be used for Methodist meetings only. A short time later, the trustees, under the will, turned the chapel and trust fund over to the trustees of Asbury Church. Sunday School has always been held, first under the leadership of Mrs. Jerman and then by members of Asbury Church. For a few years it was a preaching station on the Smyrna Circuit. In 1914, during the pastorate of the Rev. Milton McCann, the chapel was entirely rebuilt.

It was dedicated on May 16, 1915, by the Rev. Warren Brown assisted by the Rev. Milton McCann, the pastor. The altar had been built entirely by Mr. McCann. The Methodists ceased to hold meetings here in 1936.” (1)