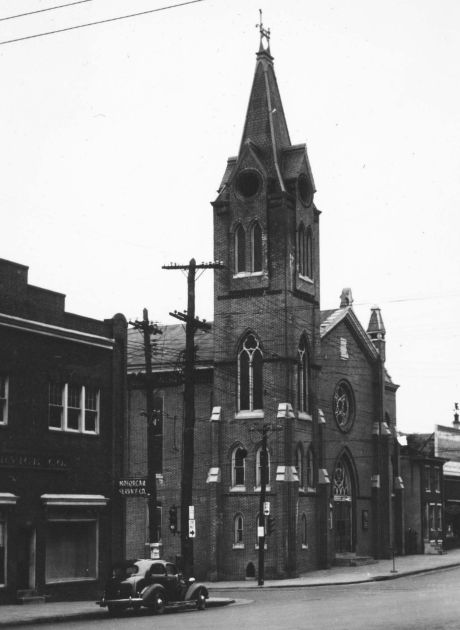 “Ezion M. E. Church, colored, organized in 1805, was the first offspring of Asbury Methodist Church. The original members were members of Asbury Church and worshipped at the regular services. In 1805, they began to hold separate meetings in private homes. In 1805, with the aid of Asbury, they withdrew to found their own church.

They built a stone meeting-house at Ninth and French Sts. They selected the name “Ezion” from Ezion Gaber, a town in the land of Edom, where Solomon’s vessels were built. In December, 1812, a group withdraw under the leadership of Peter Spencer, a local-preacher, and formed the Union Church of Africans.

In 1838, another division occurred but the old group continued and, in 1844, they enlarged the church building. In 1870, it was decided to build a new church. The last service in the old church was held on Sun., May 22, 1870, by the Revs. Jos. D. Elbard, Charles-Hill and Peter Buroughs, the pastor. During the construction, services were held in the basement of Institute Hall.

The corner-stone of the new church was laid on July 17, 187Q. The pre-liminary services were held in Institute Hall after which the congregation marched to the church site. The stone was laid by Bishop Levi Scott who was assisted by the Revs. Chas. Hill and A. Manship. The finished portion of the church was dedicated on Nov. 6, 1870, by the Rev. Messrs. Smith, Hill and Kennard.

On the afternoon of Jan. 6, 1886, the church was severely damaged by fire and it was rebuilt during that year. During the rebuilding operations serv-ices were held in the Grand Opera House. The corner-stone was relaid on Apr.18, 1886, with the Revs. Vaughn Smith, N. M. Browne and H. A. Monroe, the pastor, taking part. The church was dedicated on July 25, 1886, at the morning service. Those taking part included Bishop Andrews, Pres. Elder I. H. White and the Revs. J. D. Elbard, H. Jolly, J. Emery Webb and H. A. Monroe, the pastor. A full week of jubilee services followed.