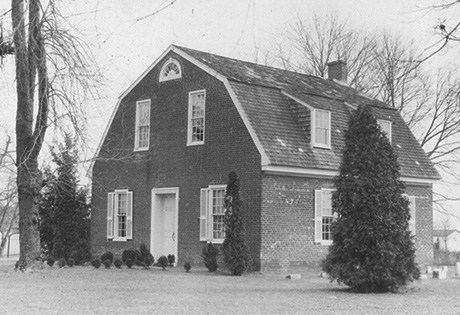 “Camden Friend’s Meeting-House was the last Meeting to be organized in Kent County but, in the meantime, it has absorbed all of the other Meetings in the County. In 1805, the present meeting-house was built for religious and school purposes. The deed for the land was executed by Jonathan and Patience Hunn on July 6, 1806, and the plot was described as being located on the road leading from the village to the poor-house. This Meeting was an offspring of Motherkill Meeting. A few of the school desks and benches can still be seen in the school-room on the second floor. This school was discontinued in 1875.

The Meeting was incorporated on Feb. 13, 1888. This meeting-house is unique in several of its features. The style of architecture is different from the usual Friend’s Meeting-House, having no porches, a single double-door and a gambrel roof with dormer windows. Then, to top it off, the meeting-house faces north instead of south. The great majority of meeting-houses, for some undetermined reason, were built facing the south. The old horse sheds have been removed. John Hunn, Governor of Delaware, 1901-05, is buried in the adjoining burying-ground. The use of foot-stones is noticeable. The oldest tombstone is that of Jonathan H. Jenkins who died on Aug. 11, 1837. A memorial to Warner Mifflin stands in the burying-ground. This stone was originally set up in Motherkill burying-ground where Mr. Mifflin is buried in an unmarked grave. When Motherkill burying-ground became extremely neglected the stone was moved to its present location in 1937. The meeting-house is equipped with candles in wall-sconces but it is doubtful if they are ever used as the Friends seldom hold meetings at night.”(1)