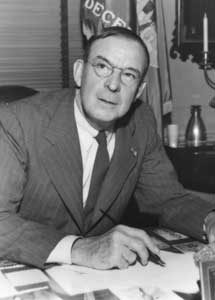 Governor Walter W. Bacon issued only one executive order during his two terms as Governor of Delaware from January 21, 1941 – January 18, 1949.

The entire personnel, officers and enlisted men of Battery D, 198th Coast Artillery (AA), Delaware National Guard Regiment presently serving in the South Pacific Theatre of War are commended for exceptionally meritorious conduct in the performance of outstanding serviced during the period of 27 October 1943 – 1 November 1943. On 27 October 1943, this unit was part of the first echelon to land on enemy occupied territory. The landing was accomplished in the face of heavy enemy mortar fire and beach resistance in the form of pill-boxes. Despite these obstacles, the Battery quickly unloaded its personnel and guns and in an expeditious manner established gun positions. In spite of the fact that one gun was put out of action by mortar fire, the remaining guns set up a strong anti-aircraft defense which repelled all enemy air attacks for five successive nights. Harassed constantly by snipers and handicapped by the fact that personal equipment had been destroyed by a fire at an ammunition decamp, the morale and fighting spirit of this unit remained high and lack of sleep and personal discomfort proved to be no deterrent to the successful accomplishment of their assigned mission.

The conduct of these brave troops reflects not only the highest credit and glory upon themselves but upon the Regiment for which they are a part and upon their state whose high privilege it was to send forth this Regiment to the services of the Nation. In their accomplishment each citizen of Delaware may take a just pride and pleasure and their conduct is worthy of emulation by all members of the armed forced of the United States.

* – Reproduction of the original text.