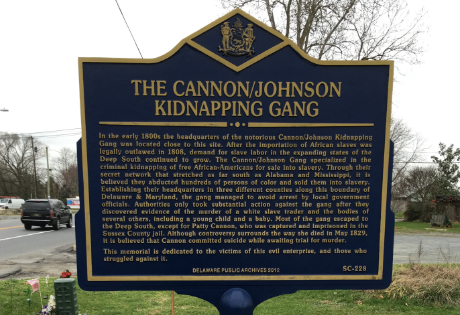 In the early 1800s, the headquarters of the notorious Cannon/Johnson Kidnapping Gang was located close to this site. After the importation of African slaves was legally outlawed in 1808, demand for slave labor in the expanding states of the Deep South continued to grow. The Cannon/Johnson Gang specialized in the criminal kidnapping of free African-Americans for sale into slavery. Through their secret network that stretched as far south as Alabama and Mississippi, it is believed they abducted hundreds of persons of color and sold them into slavery. Establishing their headquarters in three different counties along this boundary of Delaware & Maryland, the gang managed to avoid arrest by local government officials. Authorities only took substantial action against the gang after they discovered evidence of the murder of a white slave trader and the bodies of several others, including a young child and a baby. Most of the gang escaped to the Deep South, except for Patty Cannon, who was captured and imprisoned in the Sussex County jail. Although controversy surrounds the way she died in May 1829, it is believed that Cannon committed suicide while awaiting trial for murder. This memorial is dedicated to the victims of this evil enterprise, and those who struggled against it.