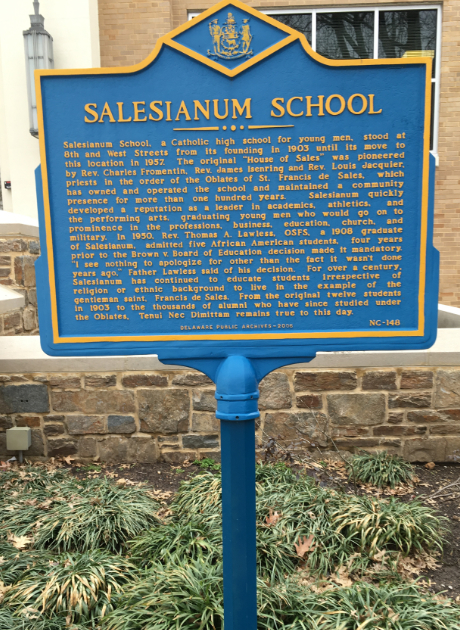 Salesianum School, a Catholic high school for young men, stood at 8th and West Streets from its founding in 1903 until its move to this location in 1957. The original “House of Sales” was pioneered by Rev. Charles Fromentin, Rev. James Isenring and Rev. Louis Jacquier, priests in the order of the Oblates of St. Francis de Sales, which has owned and operated the school and maintained a community presence for more than one hundred years. Salesianum quickly developed a reputation as a leader in academics, athletics, and the performing arts, graduating young men who would go on to prominence in the professions, business, education, church, and military. In 1950, Rev. Thomas A. Lawless, OSFS, a 1908 graduate of Salesianum, admitted five African American students, four years prior to the Brown v. Board of Education decision made it mandatory. “I see nothing to apologize for other than the fact it wasn’t done years ago,” Father Lawless said of his decision. For over a century, Salesianum has continued to educate students irrespective of religion or ethnic background to live in the example of the gentleman saint, Francis de Sales. From the original twelve students in 1903 to the thousands of alumni who have since studied under the Oblates, Tenui Nec Dimittam remains true to this day.