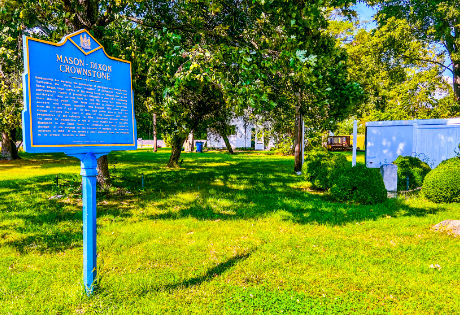 Responsible for making boundaries of Maryland and Pennsylvania (including the “Three Lower Counties” of Delaware). Mason and Dixon began their survey of the North-South of Tangent Line at the southwestern corner of present-day Delaware in June 1764. Proceeding northward, they arrived here on July 30, forty-five miles from their starting point. They later returned to replace temporary markers with stones imported from England. Mile point stones bore the letters P and M. At five-mile points such as this, the stones included the coats of arms of the Calverts and Penns, proprietors of the colonies. In 1904, Maryland officials removed the stone for exhibition at the St. Louis World’s Fair. It was later displayed in the State House in Annapolis and then replaced in storage. At the request of the citizens of Marydel, the stone was returned in 1954. It was moved a short distance from the roadside to its present location in 1968.