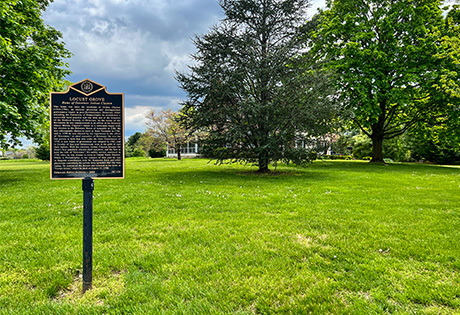 This home was once the residence of Joshua Clayton (1744-1798), an eminent physician and distinguished government leader in post-Revolutionary Delaware. After attending the University of Pennsylvania he established a successful local practice and was later one of the founders of the Delaware Medical Society. At the outset of the Revolution he was commissioned as an officer in the Bohemia Manor Militia. Clayton’s career as a statesman began with his election to the Delaware House of Assembly in 1783. He was subsequently chosen to serve as State Treasurer in 1786, and in 1789 he was elected by the legislature to the office of “President,” or chief executive of Delaware. He was the last person to hold that title under the State Constitution of 1776. A new frame of government was adopted in 1792, and in October of that year Delawareans went to the polls to cast their ballots. With his election, Joshua Clayton became the State’s first popularly elected chief executive, and the first to hold the title of “Governor.” His public service continued in 1798 when he was chosen to serve as United States Senator. While in Philadelphia in the summer of that year he was in frequent consultation with Dr. Benjamin Rush and other physicians concerning the yellow fever epidemic that was then raging. He contracted the disease and returned to his home at “Locust Grove,” where he died on August 11, 1798.