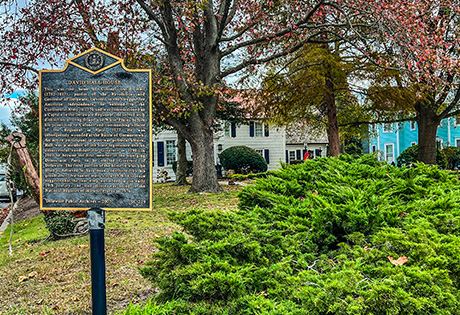 This was the home of Colonel David Hall (1752-1817), a patriot of the Revolution and Governor of Delaware. Devoted to the struggle for American Independence, he enlisted in the Continental Army in 1776 and was commissioned as a Captain in the Delaware Regiment. He served with distinction at Long Island and White Plains before his promotion to Colonel and commanding officer of the Regiment in April 1777. He was subsequently wounded at the Battle of Germantown. An active participant in post-war political affairs, Hall was a member of the state legislature and an unsuccessful candidate for Governor in 1798. In 1801 he became the first member of the emerging Democratic Party to be elected Governor of Delaware. The front portion of the home in which he lived is believed to have been constructed by his grandfather, Nathaniel Hall, circa 1730. Evidence suggests that the rear wing was added in the early 19th century. The Hall House was listed in the National Register of Historic Places in 1976.