To celebrate Archives Month, we’ll be sharing some of our recent accessions. Check back each Friday for a new post.

Vera Gilbride Davis was a prominent figure in Delaware politics for more than forty years. She was called the “Grande Dame of Delaware Politics” and was known for achieving a number of firsts for women during her career. She was the first woman bill clerk in the House of Representatives, first woman secretary of the Senate, first woman elected president pro tempore of the Senate, first women to serve as House majority leader, and first woman elected state treasurer of Delaware. In addition to her political accomplishments, Mrs. Davis served on the state Board of Welfare, was president of Easter Seals of Delaware, served on the Mothers Pension Commission, and at the time of her death was the longest serving member of the Board of Directors of Kent General Hospital. Her contributions were many, and her successful career opened the doors for thousands of Delaware women who aspire to serve their fellow citizens. 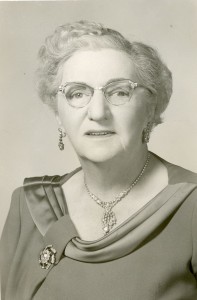 The Davis Collection consists of a wide variety of documents, photographs, and newspaper clippings that the Davis family saved for over 100 years. Mrs. Davis’ State Treasurer certificate is included in the collection as well as private correspondence, papers from the many boards she served on, an invitation to Harry Truman’s inauguration, and Equal Rights papers from her fight for women’s rights in the beginning of the 20th century. The collection also contains many documents regarding her husband, Frank Hall Davis, Sr., and sons Frank Jr. and John who both served in World War II.

Patricia Mercer, Mrs. Davis’ granddaughter, recently donated the Davis Collection to the Delaware Public Archives. After the collection was processed, Patricia and her husband Tom visited the Archives to help archivists identify photographs, which will enable even more researchers to connect with the collection. 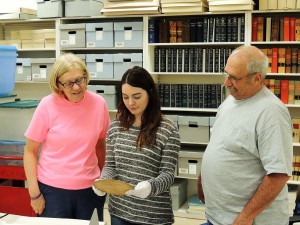