In recognition of Delaware Day, December 7, being the day that Delaware was the first state to ratify the United States Constitution, the Delaware Public Archives has recently created a shadow box exhibit that celebrates the story of Delaware’s role as the First State to ratify the United States Constitution. This exhibit features facsimiles of original documents drawn from the collections of the Delaware Public Archives and will only be displayed for a limited time.  These documents, along with the pictures and other Archives resources featured in the shadow box exhibit, describe the state’s role in the ratification process, and the interests and activities of Delawareans during this watershed period in our country’s history. The centerpiece of the Archives’ celebration is Delaware’s Ratification Document. Signed by the thirty delegates on December 7, 1787, this document bears historic witness to Delaware’s role as the first state to approve our nation’s new frame of government.  As noted by State Archivist Stephen Marz, “this display truly shows Delaware at a time when it was a leader in determining the type of government that would be implemented at the national level.” To view documents online related to Delaware being the First State check the webpage http://archives.delaware.gov/exhibits/document/index.shtml

To honor this special day in Delaware history, Governor Markell came to the Delaware Public Archives for a ceremony in which he read the official proclamation of Delaware Day and honored Dr. Carol E. Hoffecker as the recipient of the 2011 Governor’s Heritage Award.  Congratulations, Carol! 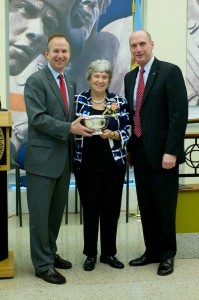 Governor Jack Markell and Secretary of State Jeff Bullock stand with Dr. Carol Hoffecker as she displays her award.