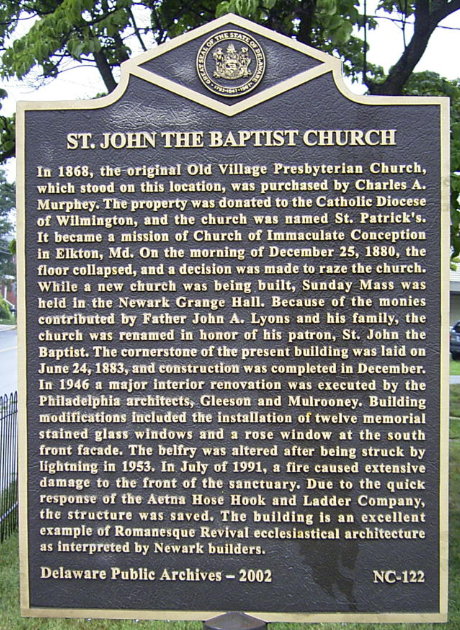 In 1868, the original Old Village Presbyterian Church, which stood on this location, was purchased by Charles A. Murphey. The property was donated to the Catholic Diocese of Wilmington, and the church was named St. Patrick’s. It became a mission of Church of Immaculate Conception in Elkton, Md. On the morning of December 25, 1880, the floor collapsed, and a decision was made to raze the church. While a new church was being built, Sunday Mass was held in the Newark Grange Hall. Because of the monies contributed by Father John A. Lyons and his family, the church was renamed in honor of his patron, St. John the Baptist. The cornerstone of the present building was laid on June 24, 1883, and construction was completed in December. In 1946 a major interior renovation was executed by the Philadelphia architects, Gleeson and Mulrooney. Building modifications included the installation of twelve memorial stained glass windows and a rose window at the south front facade. The belfry was altered after being struck by lightning in 1953. In July of 1991, a fire caused extensive damage to the front of the sanctuary. Due to the quick response of the Aetna Hose Hook and Ladder Company, the structure was saved. The building is an excellent example of Romanesque Revival ecclesiastical architecture as interpreted by Newark builders.