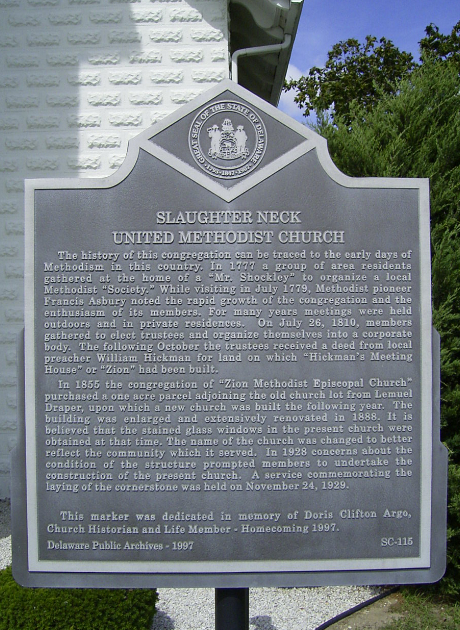 The history of this congregation can be traced to the early days of Methodism in this country. In 1777 a group of area residents gathered at the home of a “Mr. Shockely” to organize a local Methodist “Society.” While visiting in July 1779, Methodist pioneer Francis Asbury noted the rapid growth of the congregation and the enthusiasm of its members. For many years meetings were held outdoors and in private residencies. On July 26, 1810, members gathered to elect trustees and organize themselves into a corporate body. The following October the trustees received a deed from local preacher William Hickman for land on which “Hickman’s Meeting House” or “Zion” had been built. In 1885 the congregation of “Zion Methodist Episcopal Church” purchased a one-acre parcel adjoining the old church lot from Lemuel Draper, upon which a new church was built the following year. The building was enlarged and extensively renovated in 1888. It is believed that the stained glass windows in the present church were obtained at that time. The name of the church was changed to better reflect the community which it served. In 1928 concerns about the condition of the structure prompted members to undertake the construction of the present church. A service commemorating the laying of the cornerstone was held on November 24, 1929. This marker was dedicated in memory of Doris Argo, Church Historian and Life Member of Slaughter Neck United Methodist Church – Homecoming 1997.