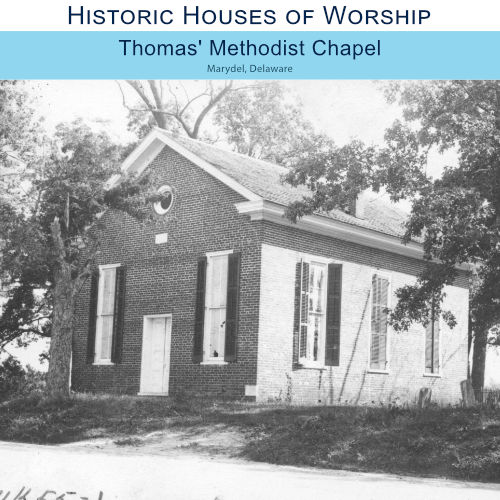 “Thomas’ Methodist Chapel (M.E.) is located four miles west of Hazlettville. One-half acre of land was donated by Hennelope Freeman-Mrs. Owen Irons to the Rev. Wm. Thomas to be used as a site for a church by “the people called Methodists to preach and expound God’s Holy Word.” A log chapel was built and a graveyard was laid out. On Dec. 24, 1779, Mr. Thomas transferred the property to a board of trustees. It was known locally for many years as the “Log Chapel” and as “Forest Chapel” although its official name was ‘Thomas’ M. E. Chapel” in honor of the Rev. William Thomas. On May 13, 1781, Harry, a negro, preached upon the subject, ‘The barren fig tree” and from the mention made by Bishop Asbury “that the circumstance was entirely new and that the white people looked on with attention,” it is believed to have been the first instance of a negro preaching to white people on the Peninsula. Harry was Bishop Asbury’s servant and accompanied him on his travels.

The log chapel was moved away, in 1798, and a frame chapel was erected. This chapel was dedicated by Freeborn Garrettson. The present brick chapel was built in 1825. It was dedicated by the Rev. Solomon Higgins. In 1877, the chapel was rebuilt in modern style. The walls were raised three feet, the gallery was removed and a recess pulpit was built. It was dedicated on Nov. 25, 1877, by Pres. Elder Charles Hill and the Rev. J. H. Caldwell. Services are held every other Sunday afternoon. In the rear gable, the date 1825, in large figures, is laid out with black header bricks. The graveyard beside the chapel is well maintained. The oldest tombstone that the writer could find is that of the Rev. John Connelley who died on Dec. 21, 1845.”(1)