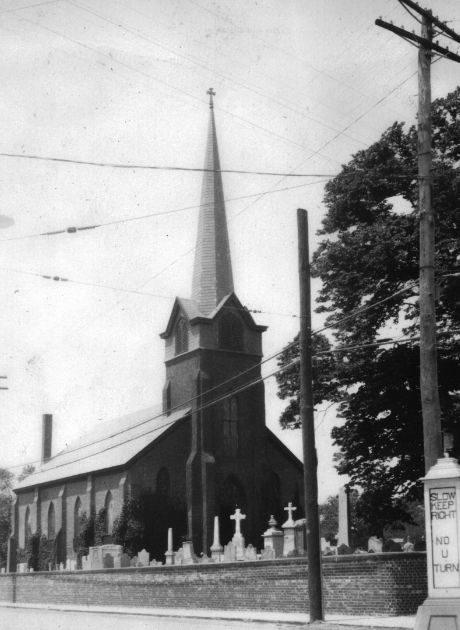 “St. Peter’s P. E. Church at Lewes. In 1681, the people of Lewes fenced in four acres of land and laid out a graveyard. They petitioned Gov. Sir Edmond Andros for a grant of this land for the use of the Church of England. This land was granted to them on Apr. 25, 1689. As has happened in a number of other places, the citizens assumed that this land was for general use and acted on that belief. The Levy Court built a Court House upon the church land and church services were held in the Court House for several years.


In 1707, the people petitioned the Church of England to send them a minister. The Rev. Wm. Black, a missionary, arrived on July 26, 1708 and stayed until August 1709. He seemed to think that only a native could stand the terrible climate.


On Aug. 7, 1716, Samuel Rowland donated one acre of land, near Lewes and fronting on the River of Lewes, now the canal. The deed called for an annual rental of one grain of Indian corn and stipulated that a church of the Church of England would be erected on the site.


The Rev. George Ross arrived on Aug. 5, 1717 and preached in the Court House on the 6th, 7th and 9th. The Rev. Wm. Becket arrived on Sept. 1, 1721, and the building of a church was immediately planned. The frame of the church was raised on Oct. 6, 1721. He reported on May 19, 1724 that the church was nearly finished. It had been placed in use early that year, In 1727, the dispute between Wm. Penn and Lord Baltimore as to the ownership of the three counties comprising Delaware was still unsettled. Mr. Becket believed that the decision would be against both of the claimants and that the land would revert to the Crown. So he suggested to the Church authorities that they petition the King to grant the three counties to the Church as a glebe—a glebe that would have supported many churches in fine style.
On Oct. 11, 1728, Mr. Becket described the church at Lewes as follows: “40 ft. by 24 ft. by 15 ft. high, the frame of wood, roof of cypress shingles and the walls of cypress boards. The floor was laid, the walls wainscotted with cypress as high as the tops of the pews; the pulpit, desk, communion table and rail handsomely built of black walnut and the pews made of pine plank.” In 1741, the inside was wainscotted in a “plain decent manner’ and the roof was arched.

The Court House at Georgetown, the new County seat, being nearly completed, the Commissioners advertised the Court House at Lewes for sale. It was purchased on Oct. 18, 1791, by Thomas MclIlvain, carpenter, for 85 pounds. He sold the building to a group of Lewes citizens on Feb. 6, 1793. This group presented the building to St. Peter’s Church on May 6, 1797. The vestry rented the building to various parties at a yearly rental of from 25 to 30 pounds.
On April 11, 1795, the pew rents were raised 33 1/3%. In June, 1808, a new church was raised. It was the same size as the old church but was set 30 or 40 ft. south and west of the old site. The Rev. James Wiltbank held the first service in the new church on Aug. 28, 1808. The building was completed and the workman discharged on Sept. 15, 1808. 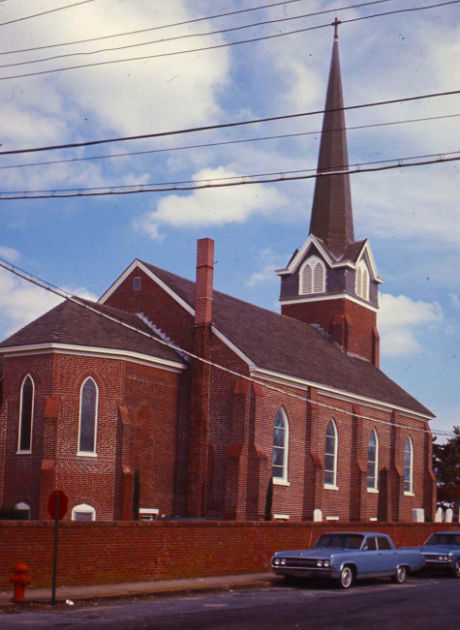 In 1854, the old church with its high pulpit was moved over to a corner of the lot and the erection of the present church was started on the old site. The cornerstone was laid on May 27, 1854, by Bishop Alfred Lee. The church was completed and the opening service, was held in November, 1857. The dedication services lasted for a full week with the consecration taking place at 10 A. M. on Thurs., Aug. 12, 1858, with Bishop Lee in charge. He was assisted by the Rev. Messrs. Martin, Colton, Franklin, Slack, Wright, McKim and McIlvaine.
The old church was fitted up to be used as a school and for week-day ‘services. A colored Sunday School was opened on May 9, 1858. In 1870, the church was improved, the tower and spire being added. The second building still stands on a dairy farm near Five Points doing valiant service as a farm building. Additional land was purchased on Apr. 18, 1887, from Wm. P. Orr.
In 1890-91, the church was redecorated and a pipe-organ was installed. A new altar and reredos were installed in 1892. On Aug. 24, 1896, a new altar rail was presented in memory of Dr. Harbeson Hickman. During the summer of 1913, the church was renovated after which Bishop Frederick J. Kinsman conducted a service of benediction for a restored church on Sept. 1, 1913.
On Dec. 14, 1913, Bishop Kinsman dedicated 3 windows and also a tablet placed in the church by the Judiciary of Delaware in memory of the first Chief Justice of Delaware, Ryves Holt, who was a warden of St. Peter’s and who is buried in the graveyard.
In the graveyard surrounding the church many early famous Sussex Countians are buried. Four former Governors of Delaware: Daniel Rodney, Caleb Rodney, Samuel Paynter and Joseph Maull are buried here.
Over near the south wall is the famous Feb. 30th tombstone, over the grave of Elizabeth H. Cullen. The present Gregorian calendar was laid out by Pope Gregory VIII, in 1582. It was not adopted by the English Colonies until 1752, and a great many of the colonists opposed the change. These persons continued to use the Julian calendar in which February had thirty days in leap years. The family of Elizabeth Cullen appear to have been numbered among these “‘diehards” and they insisted on marking her tombstone “Born Feb. 30th, 1760.” Close to the front of the church is the grave of Captain Henry McCracken, a Delaware river pilot, who requested that his anchor be buried with him. One of the flukes of the anchor can be seen protruding from the grave. The oldest tombstone, close to the side of the church, is over the grave of Margaret Huling who died on Feb. 16, 1707. So far as the writer can determine this is the oldest inscribed tombstone in Delaware.” (1)