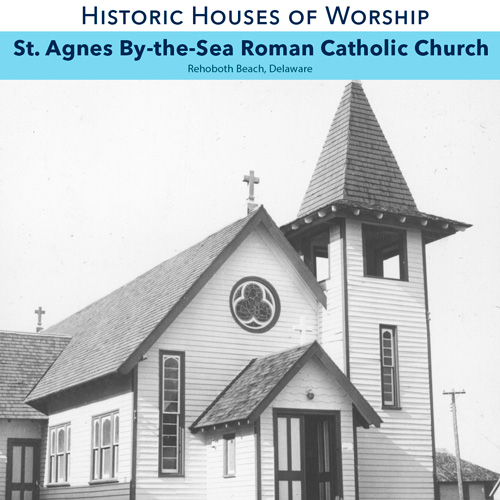 “St. Agnes-by-the-Sea R. C. Church at Rehoboth Beach. The Roman Catholic Order of St. Francis de Assisi was established in the United States in the year 1855, with Sister Agnes as Mother Superior. On the 50th Anniversary of the Order, in 1905, the Most Rev. Bishop Monaghan, of the diocese of Wilmington, presented to the Order a cottage at Rehoboth Beach, where the sisters could spend a vacation each year.

In connection with the cottage, a small chapel was established for religious worship. As the community grew, the chapel soon proved too small to accommodate the worshippers who wished to attend Mass. A frame church was then built and named “St. Agnes-by-the-Sea,” in honor of the patron saint of the first Mother Superior. The dedication was arranged to be held on Thurs., Aug. 9, 1906, by the Most Rev. John J. Monaghan. He was assisted by Fathers Wm. J. Bermingham, T. F. Waldron and the Rev. Father Felix. It was announced on May 9, 1946 that the church had been sold. At the same time the Franciscan Nuns’ Summer Home was also purchased by Mrs. Margaret Broeders who planned to convert the property for hotel purposes.” (1)