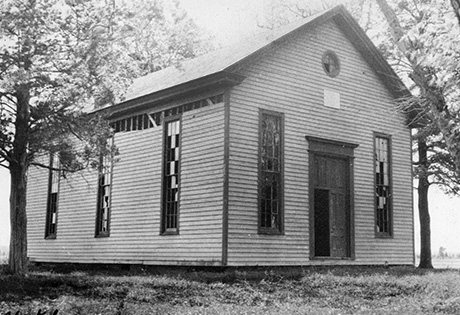 “Severson M. E. Church is located six miles east of Smyrna. On May 13, 1783, James Severson donated the land upon which to build a church and to maintain a graveyard. The church was built in 1783, named “Severson,” and it was one of the first frame church buildings in Kent County. For a time it was called “Carrollton” but after being rebuilt, in 1874, the name “Severson” was restored at the dedication service held on Sept. 27, 1874, at the evening service, by the Revs. George Hughes and William B. Gregg, the pastor. The sermon was delivered by the Rev. G. D. Watson. A pulpit Bible was presented by Mrs. Rachel J. Truax and a communion service was the gift of Emma R. Stevenson, Mary A. Severson and M. Emily Truax.

In 1895, Presley Ford donated a house and lot for the use of the sexton. During the year 1900, the church was repaired and remodeled. At times interest lagged but in 1914, new life developed in the services. In 1921, the church ceased to function and it soon deteriorated into a sad state of neglect. At the 1941 Methodist Conference it was decided to sell the church. The building was sold in the fall of 1942. The lumber was salvaged and used to erect a dwelling on the north-bound lane of the State Highway just north of Duck Creek.

The graveyard is in deplorable condition, with many of the tombstones knocked “galley west.” It certainly needs to be given attention by some re-sponsible person. The oldest tombstone that the writer could find is that of Jane Palmatary who died on Dec. 24, 1815. It had been tumbled over with the inscription side down.”(1)