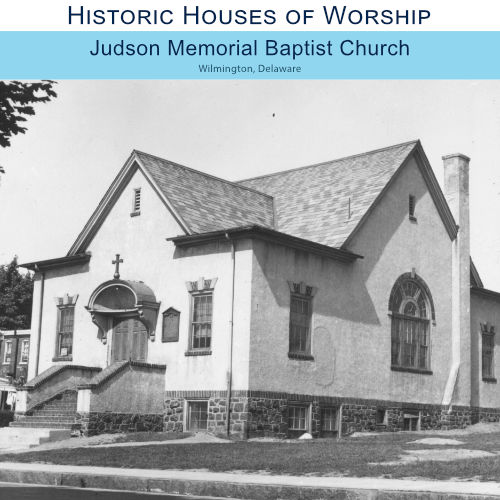 “Judson Memorial Baptist Church at Elm and Franklin Sts. When Bethany Church merged with Delaware Avenue Baptist Church all activities were removed to Delaware Avenue Church. Some of Bethany’s members were not happy at the prospect of having no Baptist Church in the old neighborhood. On Fri., Oct. 16, 1931, twenty former members of Bethany met at the home of Ira P. Phillips at 1004 Elm St. and organized as the Elm Street Baptist Mission. Meetings were held at various homes. A Sunday School was organized and met at the home of J. I. Crossan. The Rev. L. Judson Westfall was very active in this organization and was always considered as their senior pastor and adviser.

On Dec. 24, 1931, the meetings were transferred to the Polish Baptist Church at Elm and Franklin Sts. This Mission was an independent organization and paid $30.00 per month for the use of the church. The Polish congregation would meet at 10 A. M. on Sundays and the Elm Street Mission would meet at 11 o’clock. The mid-week meetings were held on different nights. The first pastor, the Rev. E. C. Osborne was called on Jan. 19, 1932. On Jan. 8, 1934, the Mission sent in a petition to the Delaware Baptist State Convention asking recognition as a church. The name “Judson Memorial” was selected in honor of the Rev. L. Judson Westfall, who, in the meantime had passed away. Much against the wishes of many of the members, the church was closed in October, 1941 and the members scattered to other Baptist Churches. The property was purchased on Feb. 11, 1942 by the Polish Army Veterans.” (1)