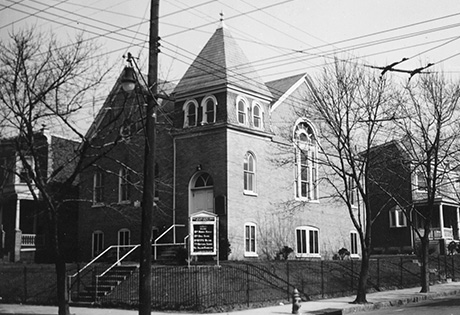 “In 1873, occasional Swedish services were held in Delaware Avenue Baptist Church. During the period 1874-84 no regular services were held but meetings were held occasionally under the leadership of A. P. Anderson. On Wed. evening, Jan. 9, 1889, a meeting was held at Coffin’s Hall, 12th and Heald Sts. when it was decided to organize a church. The organization took place on Sat. evening, Jan. 12, 1889 and on Jan. 13, a baptismal service was held in the Second Baptist Church. The early meetings were held on Heald St., next door to the n. e. cor. of 12th St.

The dedication ceremonies began on Sat., Apr. 23, 1904 at 745: P. M. with speeches, singing, etc. On Apr. 24, at the morning service, the dedication sermon was preached by the Rev. C. P. Eckman. A service in English was held at 3 P. M. The benches were the gift of the congregation at Dividing Creek, N. J., and some of these benches are still in use in the church balcony. The property at 12th and Heald Sts. was sold on Mar. 28, 1904. The parsonage was completed on Feb. 1, 1910. The church was remodeled after which it was rededicated on Oct. 9, 1921. The ceremonies began with a. meeting on Sat. evening. The church was rededicated on Sun. morning by the Rev. Wilhelm Justinius of Stockholm, Sweden. The afternoon services were conducted by the Rev. Dr. George D. Allison. In the evening Mr. Justinius preached a sermon in Swedish and the pastor preached in English. On the 1st and 3rd Sun. nights the services were to be in English. A new organ was dedicated on June 1, 1938, by the pastor, the Rev. Martin A. Larson. The chimes and the grill were donated as memorials.

The 50th Anniversary was celebrated with services lasting a full week. On Mar. 7, 1943, the church name was changed to “Grace.” This was done because immigration from Sweden had virtually ceased and all of the services * were being held: in the English language.” (1)