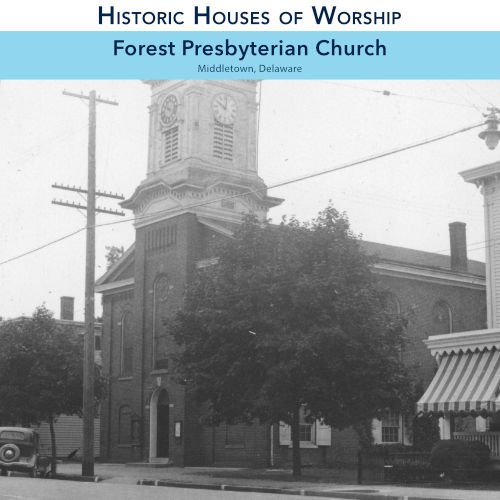 “Forest Presbyterian Church at Middletown. On June 6, 1750, Robert Alexander granted, to a board of trustees, a tract of land upon which to build a church. This land is included in the present Forest Cemetery. The church stood on the s. e. corner of the plot. The church was incorporated on Jan. 1, 1789. On Dec. 18, 1789, Slayter Bouchell and Thos. Witherspoon deeded to the trustees one acre of land on Mill Branch of Drawyer’s Creek. In return, they were granted church pew No. 3, valued at five pounds. This church was closed about 1830 and having fallen into decay it was sold and moved away in 1840.

On Sept. 25, 1849, Robert A. Cochran sold to “the trustees of Forest and Middletown Presbyterian Church, about to be revived,” the church site on the south side of Main St. The present brick church was then built. The cornerstone was laid on Thurs., May 9, 1850. The dedication service was held on Oct. 26, 1851, at 11 A. M. by the Rev. Isaac W. K. Handy, the pastor. All-day services were conducted by the Revs. Thomas Brainard, D.D., John Patton and the pastor. Rainy weather kept the attendance down. On Mar. 2, 1878, a two-acre addition to the cemetery was purchased from Nehemiah Burris. The parsonage lot was purchased on May 16, 1863 from R. A. Cochran. On the vestibule walls there are three marble tablets. The first is inscribed ‘Founded 1750 Rebuilt 1850,” the second contains a list of the trustees of 1850 and the third lists the ministers who served the church from 1851 until 1920. An addition was built in 1882. Major improvements were made in 1899, after which a reopening service was held on Oct. 1, 1899, by the Revs. F. H. Moore and J. L. Vallandingham. In front of the church and close to the wall there are four graves covered with flat slabs. These are members of the Peterson family, whose private burial plot was on the site when the church was built. One is dated 1741. In 1906, the tower clock was presented by Mrs. Frances C. Comegys as a memorial to her parents. Former Governor John P. Cochran is buried in Forest Cemetery.” (1)