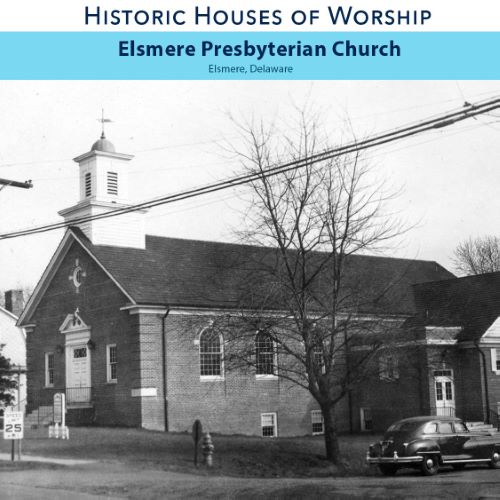 “Elsmere Presbyterian Church was organized, in the schoolhouse, in 1889, by Miss Ada Warren, principal of the school. Robert P. Robinson, afterwards Governor of Delaware, was the first Mission Scholl, Superintendent. The corner-stone of the church was laid in 1891, and a special train was run from Wilmington for the event. It was 1911 before the church was recognized by the Presbytery.

The 52nd Anniversary of the Sunday School and the 30th Anniversary of the church organization were celebrated on Sun., Jan, 12, 1941. The anniversary sermon was preached in the morning by the Rev. A. N. Stubblebine, the pastor. The Rev. Dr. John W. Christie preached in the evening. The benediction was delivered by the Rev. Dr. Donald C. MacLeod. The services were continued for a full week. In the fall of 1944, the Crawford property at New Road and Ohio Ave. was purchased as a site for a new church. The house was reconditioned to be used as a manse. Four hammered brass offering plates, in memory of Miss Sarah Snodgrass, were dedicated on Oct. 21, 1945, by the Rev. Clarence S. Hoffman, the pastor.” (1)