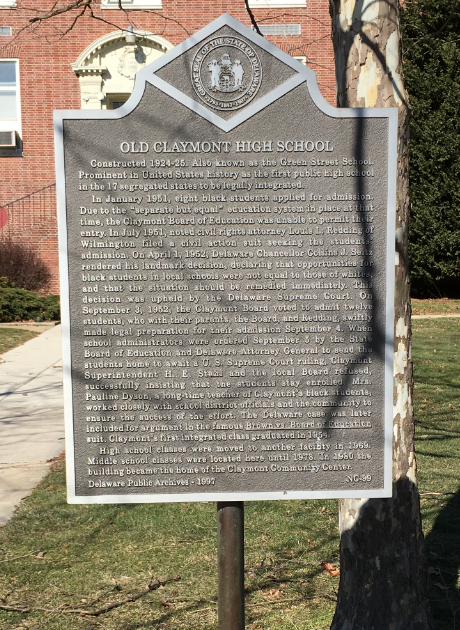 Constructed 1924-25. Also known as the Green Street School. Prominent in United States history as the first public high school in the 17 segregated states to be legally integrated. In January 1951, eight black students applied for admission. Due to the “separate but equal” education system in place at that time, the Claymont Board of Education was unable to permit their entry. In July 1951, noted civil rights attorney Louis L. Redding of Wilmington filed a civil action suit seeking the students’ admission. On April 1, 1952, Delaware Chancellor Collins J. Seitz rendered his landmark decision, declaring that opportunities for black students in local schools were not equal to those of whites and that the situation should be remedied immediately. This decision was upheld by the Delaware Supreme Court. On September 3, 1952, the Claymont Board voted to admit 12 students, who with their parents, the board, and Redding, swiftly made legal preparation for their admission September 4. When school administrators were ordered September 5 by the State Board of Education and Delaware Attorney General to send the students home to await a U.S. Supreme Court ruling, Claymont Superintendent H.E. Stahl and the local Board refused, successfully insisting that the students stay enrolled. Mrs. Pauline Dyson, a long-time teacher of Claymont’s black students, worked closely with school district officials and the community to ensure the success of the effort. The Delaware case was later included for argument in the famous Brown vs. Board of Education suit. Claymont’s first integrated class graduated in 1954. High school classes were moved to another facility in 1969. Middle school classes were located here until 1978. In 1980 the building became the home of the Claymont Community Center.