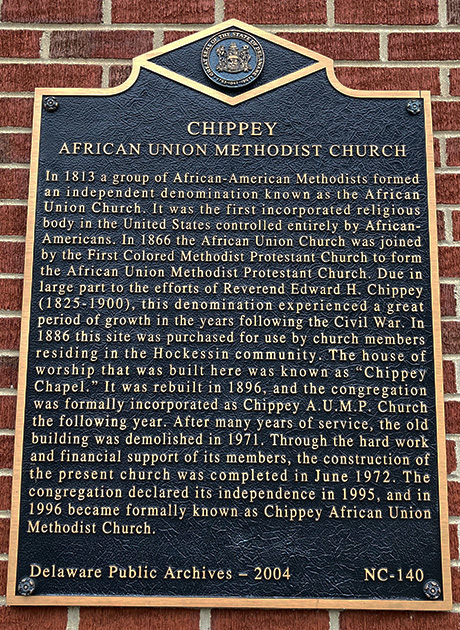 In 1813, a group of African-American Methodists formed an independent denomination known as the African Union Church. It was the first incorporated religious body in the United States controlled entirely by African-Americans. In 1866 the African Union Church was joined by the First Colored Methodist Protestant Church to form the African Union Methodist Protestant Church. Due in large part to the efforts of Reverend Edward H. Chippey (1825-1900), this denomination experienced a great period of growth in the years following the Civil War. In 1886 this site was purchased for use by church members residing in the Hockessin community. The house of worship that was built here was known as “Chippey Chapel.” It was rebuilt in 1896, and the congregation was formally incorporated as Chippey A.U.M.P. Church the following year. After many years of service, the old building was demolished in 1971. Through the hard work and financial support of its members, the construction of the present church was completed in June 1972. The congregation declared its independence in 1995, and in 1996 became formally known as Chippey African Union Methodist Church.